Beta cells in the pancreatic islets of Langerhans produce insulin. Deficiency in either beta cell mass or function, or both, can lead to insufficient level of insulin resulting in hyperglycemia (excessive levels of glucose in the blood) and diabetes. Recent studies suggest that in Type 1 and Type 2 Diabetes impairment of beta cell function is an early feature of disease pathogenesis while a substantial decrease in beta cell mass occurs more closely to clinical manifestations of diabetes. The development of novel strategies for the protection of beta cell and function could be most promising for successful diabetes treatment and prevention [6].

Insulin resistance, hormonal imbalances, stress and mitochondrial dysfunction play an important role in the pathogenesis of all form of Diabetes. The role of mental stress and pancreatic disease is now emerging.

The Prevention and Remission of Diabetes – PROD Initiative is a holistic approach, laying greater emphasis on improvement of beta cell mass and function; through diet, exercises and reduction of mental stress, in addition to medication as advised by the Physician. The total amount of insulin released, depends on the absolute number of beta cells in the pancreatic islets of Langerhans (beta cell mass) and the output of each of these cells (beta cell function).

In the pancreas, neighbouring cells can influence each other’s mass via several mechanisms. An intriguing autoimmune destructive process is triggered by pancreatic alpha cells neighbouring beta cells, which ultimately results in the reduction of beta cell mass and the appearance of hyperglycemia [3].

A successful cure for T1D, needs to stop the self-damaging autoimmune process and restore appropriate insulin release from beta cells [6].

In the pre diabetic phase initially there is a loss of ‘first phase insulin release’ as confirmed by declining ‘stimulated C peptide’ levels. The decline in ‘first phase insulin release’ is detectable even 4 to 6 years before clinical onset of T1D. After onset, beta cell destruction by the ongoing auto immune infiltration continues. It is additionally exacerbated by the increasing metabolic and glycemic overload, causing ER stress and apoptosis. In adolescents preserved beta cell mass with upto 40% residual ‘insulin- containing islets’ is observed. The residual beta cell mass and function varies with age, degree, and cellular profile of insulitis at the time of onset. In long standing diabetes the residual beta cells show signs of functional exhaustion and degranulation [6].

Type 2 Diabetes is a progressive metabolic disorder characterised by insulin resistance and hyperglycemia.
Most studies agree on a significant reduction in beta cell mass ranging from 24% to 65%, most likely due to dramatically increased rate of beta cell apoptosis. However, insulin secretion capacity in T2DM was shown to be reduced by 50%-97%. Functional beta cell compensation seems to be insufficient or to deteriorate, increasing beta cell work load and stress and resulting in functional exhaustion, dedifferentiation, and finally beta cell death [16].

Therefore, in T2DM, the protection and recovery of beta cell function should be a main treatment and prevention target [6]. 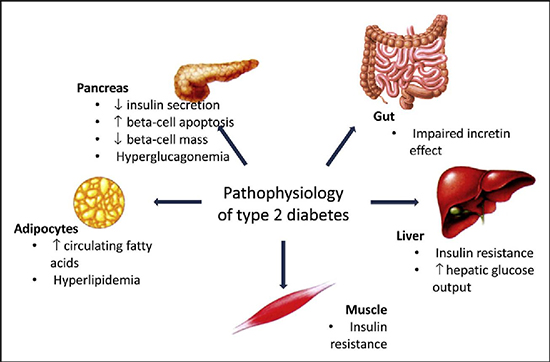 Many experts agree that we are yet to find a cure for diabetes. Type 2 DM is a complex metabolic phenomenon involving several phenomena, such as chronic inflammation and mitochondrial dysfunction.
Diabetes research is currently challenged by questions such as how to enhance survival, decrease apoptosis and replenish Beta cell mass in diabetic patients [3].