Mitochondria are energy producing organelles inside each human cell. They are bacteria like structures which have their own genetic material or DNA, RNA and protein synthesizing systems. Just like bacteria they can divide on their own (fission) and also fuse with each other (fusion). Mitochondria have a symbiotic relationship with the main cell and there is an elaborate signaling system between them and the nucleus of the cell. Mitochondria are often affectionately nicknamed “the powerhouse of the cell.” The epithet is well earned, as one of the most important contributions of the mitochondria to the cell is the production of ATP through oxidative phosphorylation (OXPHOS).

Adenosine tri phosphate (ATP) is the ‘energy currency’ of the body and it provides the energy for all the enzyme reactions and other processes in the cells. ATP is found in all living cells whether it is humans, animals, insects or bacteria. When consumed in metabolic processes, phosphorus ion donated and it converts to either the di- or monophosphates, respectively ADP and AMP. Mitochondria regenerate ATP through OXPHOS by adding phosphorus again. The human body recycles its own body weight equivalent in ATP each day. The optimal functioning of the Mitochondria and Mitochondrial Biogenesis is thus very critical for growth and health.

Each human cell contains hundreds of mitochondria. They burn the calories in our diet with the oxygen that we breathe to make chemical energy to do work and heat to maintain our body temperature. The mitochondria generate energy by oxidizing hydrogen derived from our dietary carbohydrates (TCA cycle) and fats (Beta-oxidation) with oxygen to generate heat and ATP. As a by-product of energy production, the mitochondria also generate most of the endogenous reactive oxygen species (ROS) of the cell, and these damage the mitochondria, mtDNAs, and the cell. The number of mitochondria in any tissue depends upon the energy needs of the tissue. Organs with high energy expenditure like the brain, heart and skeletal muscles have a higher number of mitochondria. Any reduction in the number or functions of the mitochondria in the tissues results in reduced functions of the organs and leads to chronic diseases. It has been observed that aged mitochondria have diminished ATP production.

Life is the interplay between structure and energy, yet the role of energy deficiency in human disease has been poorly explored by modern medicine. Declining mitochondrial function is now being recognized as one the causes for the delayed onset and progressive course of age related degenerative diseases [49]. Communication between the nucleus and mitochondria is essential for maintenance of appropriate mitochondrial activity, and disruption of this coordination often accompanies aging and age-related disease [50].

“The development of effective pharmacological therapies for OXPHOS deficiencies has been extremely limited so far. Nutritional supplementation has been tried: coenzyme Q10, vitamin C, creatine, sodium dichloroacetate, sodium pyruvate, and L-arginine. This generated some evidence of improved symptoms or slower progression in subsets of patients, but a pressing need for frontline treatments remains.
A possible therapeutic approach for OXPHOS deficiencies is to increase the number of mitochondria per cell, which can result in greater capacities to produce ATP. Another strategy is to reduce the cell-damaging side effects of dysfunctional OXPHOS, i.e., the generation of harmful reactive oxygen species (ROS) and cell death.
Along this line, resveratrol (RSV) seems an exquisite candidate, as the compound has been observed to possess mitogenetic, antioxidant, and anti-apoptotic activities.” [51]

“Resveratrol could have its place in a combined therapeutic strategy for boosting OXPHOS in deficient patients, by both stimulating mitochondrial proliferation and reducing cytotoxic ROS by-products and apoptotic cell signaling [51].” 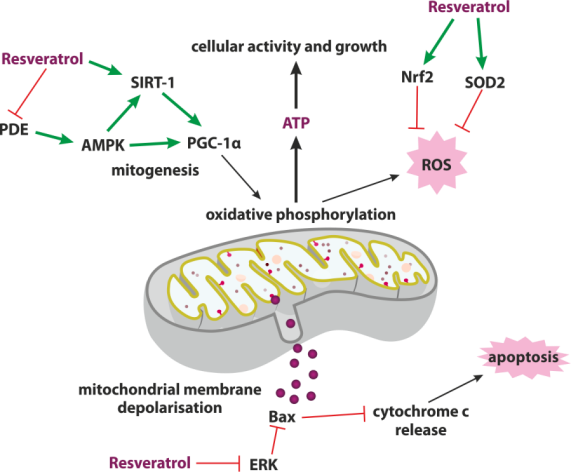 The above figure is a summary of proposed beneficial effects of resveratrol on mitochondrial respiration and cell survival [51].

Mitochondrial biogenesis is a highly synchronized process driven by changing energetic demands. Regulation is governed by a complex system of transcription factors and co-activators, in which PGC-1 functions as a master regulator. Stimulation of PGC-1 activity results in increased mitochondrial mass and function. PGC-1 expression in its turn is controlled by the peroxisome proliferation activated receptor family (PPAR) and by SIRT-1 [51].

In addition to sufficient amounts of mitochondria to achieve desirable ATP levels in the cell, interconnection of mitochondria into a complex cell-spanning network is another requisite for proper OXPHOS functioning. The mitochondrial network takes shape through the dynamic equilibrium between fusion and fission of the organelles, complexly regulated by changing cellular conditions [51].

Many studies suggest that mitochondrial dysfunction is associated with age-related diseases such as diabetes. Additionally, a study by Petersen et al. (2003) showed that elderly subjects had a marked increase in insulin resistance in muscle accompanied by decreases in mitochondrial substrate oxidation and ATP synthesis. Expression of genes involved in OXPHOS is reduced in diabetic patients, their first-degree family members and individuals with glucose intolerance. Studies showed that PGC-1alpha expression levels were also decreased [50].

Cardiovascular disease is another hallmark of aging, and PGC-1alpha has been linked to the pathogenesis of heart failure. PGC-1alpha is decreased in some forms of heart failure that are associated with a decrease in fatty acid oxidation and an increased reliance on glucose oxidation. End stage heart failure is often associated with reduced mitochondrial respiration and ATP production. There is much evidence to suggest that falling PGC-1alpha levels may play a role in age-related heart failure. Several studies suggest a link between PGC-1alpa & neurodegeneration. Impaired mitochondrial function, including decreased expression of genes involved in OXPHOS, is linked to a number of neurodegenerative diseases such as Parkinson’s, Alzheimer’s and Huntington’s disease [50].

Resveratrol does reduce the severity of physical hallmarks of aging, including cataract formation, loss of motor coordination, decline in bone mineral density and increased aortic inelasticity. SIRT1 can regulate insulin secretion from pancreatic beta cells, at least in part by regulating expression of uncoupling protein 2 (UCP2) [50].

Communication between the mitochondria and nucleus is crucial for maintenance of appropriate mitochondrial function. As a result, mitochondrial-nuclear signaling plays an integral role in normal energy homeostasis and disruption contributes to aging and age-related disease [50].

Improvement in mitochondrial function and biogenesis will thus be an important aspect of disease prevention or regression. We wish to re-emphasize that a regular exercise program coupled with a balanced diet, adequate night-time sleep and stress relieving techniques are very important for the ‘prevention and remission of diabetes’ PROD.

The Prevention and Remission of Diabetes – PROD Initiative is a holistic approach, laying greater emphasis on improvement of beta cell mass and function. Improvement of mitochondrial function and biogenesis within the beta cells and other cells in the pancreas will go a long way in restoring metabolic homeostasis.

Disclaimer: Cresvin Beta Team has taken maximum care to ensure that the information is authentic. The information has been extracted from published medical trials and text books. The information is not meant to substitute a Physicians advice, nor is it meant to treat any disease. Members are advised to consult a Physician, Dietician, Physiotherapist or Trainer before taking medication or commencing an exercise program.