As strategy protection, preservation and even regeneration of Beta Cells can go a long way in combating Diabetes and its morbid consequences. Considering the physiopathology of diabetes, preventing beta cell degeneration and stimulating the endogenous regeneration of islets will be essential approaches in treatment of diabetes. It is believed that beta cell can regenerate through the replication of pre-existing beta cells or neogenesis from stem cells and progenitor cells inside or outside the islets. Among the hundreds of plants that have been investigated for diabetes, a small fraction has shown the regenerative property [4].
Supplementation with Pterocarpus marsupium, Gymnema sylvestre, Curcumin and Resveratrol are natural remedies that help in protection, preservation and regeneration of Beta Cells by various mechanisms.

Pterocarpus marsupium
Pterocarpus is a very promising plant for combating diabetes since it has a wide variety of anti diabetic actions and is also proven in human clinical trials. The hypoglycaemic effects, antidyslipidaemic effects, antioxidative effects and the safety of the PM heartwood and the bark have been scientifically validated using a multitude of in vitro and in vivo studies. Multiple mechanisms responsible for hypoglycaemic effects of PM include Beta-cell regeneration, insulin release and insulin-like actions of some compounds isolated were identified. Additionally, inhibitions of alpha-amylase, alpha-glucosidase and protein glycation have also been demonstrated [8]. 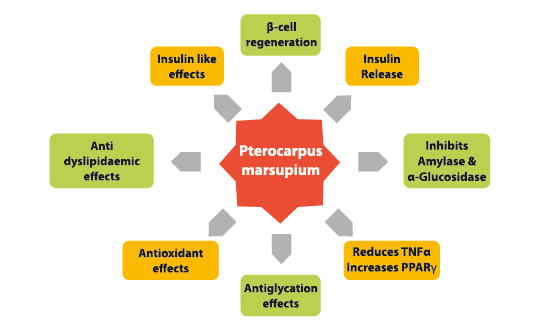 Several compounds including Pterostilbene, Pterosupin, Marsupsin, (-)-Epicatechin and Liquiritigenin isolated from the Pterocarpus marsupium were identified as compounds with hypoglycaemic effects [8].

A landmark ‘flexible dose double blind multi centre randomized controlled trial’ on 177 patients by an ICMR Study Group proved that Vijayasar (Pterocarpus marsupium) in a dose of 2-4 grams per day for 36 weeks was comparable in efficacy to Tolbutamide [28].

Another prospective, open, and non-randomized trial on 56 patients (Patidar et al) has ascertained the blood glucose lowering effect of P. marsupium as add-on therapy in patients with uncontrolled Type 2 diabetes mellitus. Reduction of mean FBG (fasting blood glucose), PBG (post prandial blood glucose) and HbA1c at the end of 12 weeks treatment with P. marsupium as add-on therapy to conventional oral hypoglycemic drugs was highly significant for all these parameter. The safety aspect of P. marsupium was also established with the dosage up to 4 g/day. There was no episode of hypoglycemia occurred in any patient [33]. They quote other studies to say that P. marsupium causes pancreatic β-cell regeneration. Other mechanisms of P. marsupium may be increased release of insulin from β-cells, prevention of insulin resistance and hindering the absorption of glucose from intestine.[33]

Gymnema sylvestre
The ability of G. sylvestre to lower blood glucose concentrations has been tested as a hypoglycemic agent in combination with insulin in humans, with encouraging results. A preliminary study shows that administration of
200 mg/d of G. sylvestre extract decreased the required insulin dose by 50% and lowered A1C in both type 1 diabetes and T2DM. It also increased the number of beta cells in the pancreas and therefore the internal production of insulin [6].

When 400 mg/d of G. sylvestre extract is taken with conventional hypoglycemic drugs such as glyburide or Tolbutamide, some patients were able to reduce the dose of the drug or even discontinue its use. In vivo studies with oral administration of an extract of G. sylvestre, (1 g/d for 60 d) induced a significant increase in circulating insulin and C-peptide, which were associated with significant reductions in fasting and postprandial blood glucose.
In vitro measurements using isolated human islets of Langerhans demonstrated direct stimulatory effects on insulin secretion in human cells, consistent with an in vivo mode of action through enhancing insulin secretion. As a result, it also stabilizes blood sugar and decreases insulin doses [6].

Curcumin
Turmeric (Curcuma longa), a rhizomatous herbaceous perennial plant of the ginger family, has been used for the treatment of diabetes in Ayurvedic and traditional Chinese medicine. The active component of turmeric, Curcumin, has caught attention as a potential treatment for diabetes and its complications primarily because it is a relatively safe and inexpensive drug that reduces Glycemia and Hyperlipidemia.

The effect of Curcumin on pancreatic cells has been extensively studied. Curcumin abates oxidative stress due to reactive oxygen species and lipid-peroxidation by reducing hyperglycemia, and enhancing endogenous antioxidant machinery (glutathione peroxidase, catalase, superoxide-dismutase, and reduced glutathione, and GSH). Our study provides clear evidence of pancreatic islets regeneration in response to treatment [29]. This could be attributed to the anti –inflammatory and antioxidant effects of Curcumin and thus creates a favorable systemic and pancreatic environment to foster islet neogenesis. Also, the role of Curcumin in cell proliferation and differentiation of stem cells may be involved [29].

Resveratrol (RES) and Curcumin (CUR) are polyphenols that possess medicinal properties that are beneficial in various diseases, such as heart disease, cancer, and type 2 diabetes mellitus (T2DM). In T2DM, cAMP plays a critical role in glucose- and incretin-stimulated insulin secretion as well as overall pancreatic Beta-cell health. A potential therapeutic target in the management of T2DM lies in regulating the activity of phosphodiesterases (PDEs), which degrade cAMP. Both Resveratrol and Curcumin have been reported to act as PDE inhibitors. Treating Beta-cell lines and human islets with these polyphenols led to increased intracellular cAMP levels in a manner similar to 3-isobutyl-1-methylxanthine, a classic PDE inhibitor. Furthermore, Resveratrol and Curcumin inhibited PDE activity in a dose-dependent manner in Beta-cell lines and human islets. Collectively, we demonstrate a novel role for naturally occurring polyphenols as PDE inhibitors that enhance pancreatic b-cell function.[31].

Resveratrol
In T1D, animal studies clearly demonstrate that Resveratrol decreases blood glucose levels and protects β-cells [9].
It is known that the β-cell failure in type 2 diabetic patients is generated by glucotoxicity, lipotoxicity, oxidative stress, inflammation, amyloid formation, endoplasmic reticulum stress and other factors. The anti-diabetic action of resveratrol is recently well established in animal models of insulin-deficient diabetes. It is very likely that the direct influence of resveratrol on pancreatic β-cells plays a pivotal role in this action. Resveratrol-induced partial regeneration of β-cells in diabetic animals results in the increase in blood insulin levels [9]. 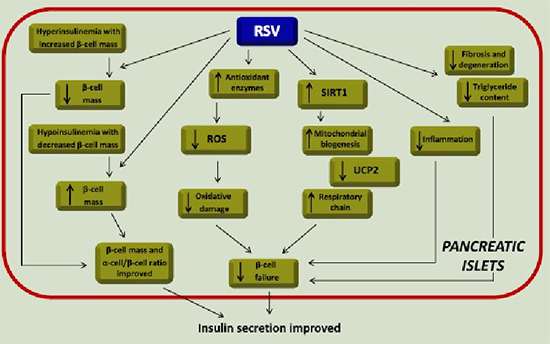 Human embryonic stem cells (hESCs) retain the extraordinary capacity to differentiate into different cell types of an adult organism, including pancreatic β-cells. A study was conducted by Daniela Pezzola et al, to optimize an efficient differentiation protocol that mimics in vivo pancreatic organogenesis and to investigate whether Resveratrol may improve the final maturation step to obtain functional insulin secreting cells. They concluded that their strategy allows the efficient differentiation of hESCs into pancreatic endoderm capable of generating β-cell-like cells and demonstrates that Resveratrol improves the maturation process [32].

The above natural substances included in Cresvin Beta are capable of regenerating Beta cells to prevent and combat Diabetes. Through adoption of healthy lifestyles that include outdoor sports, exercises, balanced diet, avoidance of stress and adequate night time sleep. The Prevention and Remission of Diabetes – PROD Initiative addresses the above factors in a holistic manner in collaboration with leading Physicians and Experts.

17 Replies to “Regeneration of Beta Cells by Natural Remedies”