Enhancing endogenous antioxidant and repair systems
There are approximately a 100 trillion cells in the adult human body. Each cell has the same genetic code, common to all humans, much like the hardware in our computer. All of us started as one embryonic cell in our mother’s womb. During the process of differentiation into various cell types and tissues, each cell expresses a particular set of genes. This is like a small part of the hardware in your computer, expressing or playing selected software. For example, all genes required for vision are expressed in the eyes. It still has the same genetic structure and is intimately connected to the whole body. After the differentiation of an embryonic cell into a specialized cell or tissue, it has to stay differentiated for a lifetime and perform its functions. Whole body homeostasis can continue only if the various cells and tissues perform their functions and do not revert or differentiate further. This is ensured by a set of ‘regulator genes’ which ensure that any further changes in the differentiated cells or tissue are ‘silenced’. These regulator genes are known as ‘silent information regulators’ (SIR) genes.
They perform their ‘sensing, regulation and repair’ functions through a series of enzymes known as Sirtuins.

SIRT1. The sirtuins are a class of histone deacetylases that inhibit gene expression. The key nutrient-sensing member of this class in mammals is SIRT1. Important downstream targets include PGC1a and NRF2, which act on mitochondrial biogenesis [16]. Resveratrol is an agonist of Sirt1 [16]. Intermittent fasting also activates Sirt1 and other defense mechanisms.
SIRT1 is able to regulate numerous vital signalling pathways, including DNA repair and apoptosis, muscle and fat differentiation, neurogenesis, mitochondrial biogenesis, glucose and insulin homeostasis, hormone secretion, cell stress responses, and circadian rhythms [17]. Resveratrol is the most potent natural activator of Sirt1 [17].

Nrf2 – Nuclear factor erythroid 2-related factor 2
Nrf2 a key transcription factor, plays an indispensable role in the induction of endogenous antioxidant enzymes against Oxidative Stress [18]. Upon exposure to ROS, Nrf2 is liberated and binds to the Antioxidant Response Element (ARE), triggers the production of many phase II detoxifying and antioxidant enzyme genes [18].

Resveratrol increases the transcriptional activity of Nrf2. Nrf2 activation may also contribute to the vasoprotective effects of resveratrol observed in diabetic and aging animals. As mentioned above, Resveratrol can mimic some of the molecular events characteristic of caloric restriction CR, which can also induce Nrf2 activation [19]. 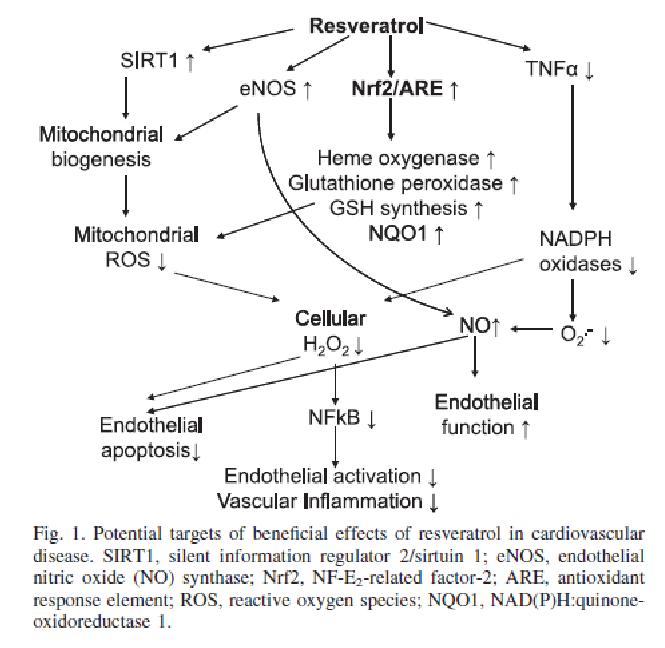 Nrf2 plays a central role in basal activity and coordinated induction of more than 250 genes, including those encoding antioxidant and phase II detoxifying enzymes and substrates [20]

Nrf2 is one of the most important cellular defense mechanisms to combat oxidative stress through regulation of phase II detoxifying enzymes and antioxidant status. These include Glutathione Peroxidase (GPx), Superoxide Dismutase (SOD), Catalase (CAT), Heme Oxygenase-1 (HO-1) and others. Improving endogenous antioxidant defenses and phase II detoxification via Nrf2 pathway represents a new class of therapeutic strategies to protect the cells against inflammation and oxidative stress [21].

Resveratrol, Curcumin and Pterostilbene are among the most well known Nrf2 activators. Importantly, Resveratrol restored the secretory function of Beta cells and further improved glucose-stimulated insulin secretion against cytokine toxicity in pancreatic islets [21]

Vitagenes – Endogenous Stress Response Systems
Vitagenes are a group of genes strictly involved in preserving cellular homeostasis during stressful conditions.
Vitagenes encode for cytoprotective heat shock proteins (Hsp) Hsp70, Heme Oxygenase-1 (HO-1), Thioredoxin reductase and Sirtuin proteins.
Heme Oxygenase-1 (HO-1) has a major role in counteracting both Oxidative and Nitrosative Stress. In fact, Heme oxygenase-1 (HO-1) induction is one of the early events in the cell’s response to stress. Heme Oxygenase-1 exerts a protective role, by degrading the intracellular levels of pro-oxidant heme and by producing biliverdin, the precursor of bilirubin. Bilirubin is an endogenous molecule with potent antioxidant and anti-nitrosative features [22].

Some of the Vitagenes are also upregulated as part of the phase 2 response, also known as the electrophile counterattack response, a cytoprotective response that protects against various electrophiles and oxidants. Examples include Heme Oxygenase 1, Thioredoxin, and Thioredoxin reductase, all of which can be upregulated by the transcription factor Nrf2 in coordination with a battery of cytoprotective proteins [23].

Proteasome and Autophagy
Proteasome is the major multi-enzyme complex that removes damaged proteins within cells, both in the nucleus and the cytosol. The ubiquitin-proteasome system is responsible for the protein quality control in a given cell in general through degradation or removal of misfolded or damaged proteins that would adversely affect cell function. The continuous synthesis and degradation of proteins plays an essential role in the maintenance of cellular homeostasis and regulation of multiple cellular functions. People with diabetes have elevated levels of modified proteins arising from glycation and glycoxidation reactions. Glycated proteins arise from the non enzymatic reaction of glucose, and reactive aldehydes derived from glucose, with proteins, lipids and nucleic acids. An accumulation of modified proteins is implicated in a wide range of age-related diseases including Alzheimer’s disease, Parkinson’s disease, Cataractogenesis, Atherosclerosis and Diabetes. This accumulation implies either an increased rate of formation of damaged proteins or a decreased rate of removal, or both.

Autophagy is a predominantly cytoprotective (rather than a self-destructive) process. Beyond its function in the adaptation of individual cells or organs to changing conditions, autophagy has a prominent role in determining the life span. Reduced autophagy has been associated with accelerated aging, whereas stimulation of autophagy might have potent anti-aging effects [25].

Autophagy is a process of cellular self-cannibalism in which portions of the cytoplasm are sequestered within double- or multi membraned vesicles (autophagosomes) and then delivered to lysosomes for bulk degradation.
Autophagy is the mechanism through which the nonnuclear (cytoplasmic) parts of the cell can be renewed and through which cytoplasmic macromolecules can be mobilized to generate energy-rich compounds that can meet the bioenergetic demand of the cell in conditions of dwindling external or internal resources. Autophagy is also a critical regulator of organellar homeostasis, particularly of mitochondria. Dysfunctional mitochondria that have lost their membrane potential and are more likely to release toxic apoptotic mediators and reactive oxygen species are apparently selectively removed by autophagy [25].

Autophagy is activated during nutrient deprivation to promote cell survival and to increase amino acid retrieval. Paradoxically, autophagy also represents a form of non apoptotic cell death and is called as ‘‘type 2 programmed cell death’’. Thus, autophagy may either promote cell death through excessive degradation of cellular constituents or protect cells from cell death by providing essential nutrients and removing damaged organelles during cellular stress, depending on the cellular and environmental context. Because autophagy degrades unnecessary or dysfunctional organelles such as mitochondria and rejuvenates their function, autophagy is expected to play important roles in the development and the maintenance of physiological function of normal tissues. In fact, disruption of autophagic process leads to failure of cavitation during embryogenesis or accumulation of abnormal mitochondria in adult tissues. Autophagy is necessary to maintain structure, mass and function of pancreatic beta cells, and its impairment cause insulin deficiency and hyperglycemia because of abnormal turnover and function of cellular organelles [26]. 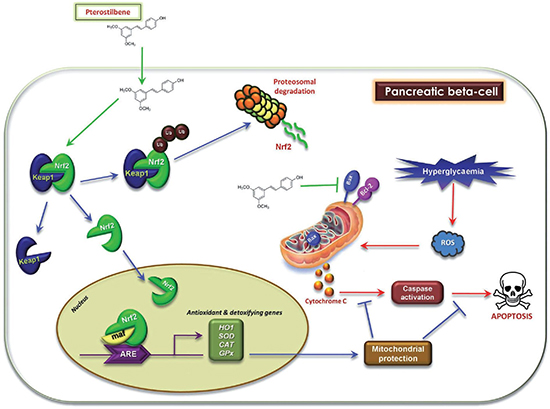 Resveratrol [22,23,25] and Curcumin [22,23,25] are two well known modulators of Proteasome function, Apoptosis and Autophagy. The overall effect is cytoprotective and pro survival.

Pterostilbene confers a profound cytoprotective effect through Nrf2 activation in pancreatic beta-cells. In addition, the antioxidant and anti-apoptotic properties of Pterostilbene also provide evidence for its cellular protective functions [27].

“The Neuroprotective effect of Resveratrol against amyloid beta toxic effects could be also mediated by promoting the intracellular degradation of amyloid beta, through the ubiquitin proteasome system (UPS)” [22].

“Curcumin and Resveratrol are inducers of the Keap1 / Nrf2 / ARE pathway. Resveratrol activates the sirtuin–FOXO pathway, resulting in increased expression of antioxidant enzymes and cell survival-promoting proteins” [23]

In addition to diet and exercise, the above natural substances including Cresvin Beta are capable of Awakening or Activating the Endogenous Antioxidant, Defense and Repair systems. They also inhibit chronic inflammation, they ‘Awaken the Power Within’, to prevent and combat Diabetes, Hypertension and various chronic inflammatory diseases. Through adoption of healthy lifestyles that include outdoor sports, exercises, balanced diet, avoidance of stress and adequate night time sleep. The Prevention and Remission of Diabetes – PROD Initiative addresses the above factors in a holistic manner in collaboration with leading Physicians and Experts.

14 Replies to “Repair of Beta Cells”