Diabetes results from a deficiency or functional impairment of insulin producing Beta cells, alone or in combination with insulin resistance (IR). The replacement or regeneration of Beta cells in humans and rodents has great promise in reversing diabetes as proven by stem cell therapies that create new human Beta cells. Here we present compelling reasons for adopting a healthy lifestyle, a balanced diet, regular physical exercise and the need for preventing and relieving stress. Beta Cells need to be saved very early in life; much earlier than we thought!
We begin life with very Limited β Cell Reserves 1

Dietary intake of sugary foods and drinks combined with a sedentary lifestyle causes the fasting plasma glucose to rise steadily during adolescence and adult life.

There may be an increase in neogenesis, or new beta-cell formation (replication), and an increase in the beta-cell mass, or hypertrophy, that may occur in response to Insulin Resistance and Obesity

Chronic inflammation can lead to loss of beta-cell mass through apoptosis and perhaps necrosis. It is the balance between neogenesis and replication and cell death that really determines our beta-cell mass. There is an increase in beta cell mass and an adaptation to the increase in demand for insulin in obese individuals. A decline in Beta Cell function happens due to exhaustion, mitochondrial dysfunction and de-differentiation of Beta Cells due to various causes.

This emphasizes the need for very early intervention via non pharmacological means to delay the onset of Metabolic Syndrome. The window of opportunity for prevention of diabetes exists because; β cell death begins 10-12 years before diagnosis of diabetes. Numerous studies including the UKPDS have shown that diabetics have already lost 50% of their β cells (at the time of diagnosis) [3]. 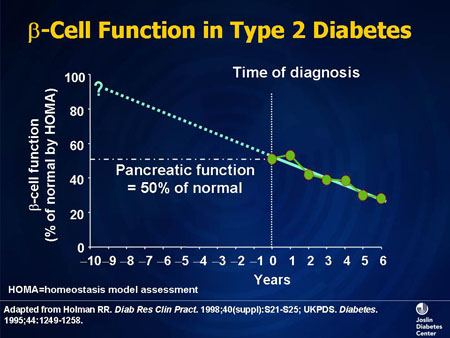 Thus, there is a dire need to save the Beta Cells very early in life through adoption of healthy lifestyles that include outdoor sports, exercises, balanced diet, avoidance of stress and adequate night time sleep. The Prevention and Remission of Diabetes – PROD Initiative addresses the above factors in a holistic manner in collaboration with leading Physicians and Experts.

Disclaimer: Cresvin Beta Team has taken maximum care to ensure that the information is authentic. The information has been extracted from published medical trials and text books. The information is not meant to substitute a Physicians advice, nor is it meant to treat any disease. Members are advised to consult a Physician, Dietician, Physiotherapist or Trainer before taking medication or commencing an exercise program.

One Reply to “Why Beta Cells need to be saved? Very early !!”